The Mary Celeste - Facts not fiction 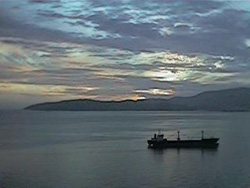 The Mary Celeste
An enduring mystery of the sea ...

A modern steel ship arrives in the Bay of Gibraltar, a safe resting place on one of the busiest shipping lanes in the world, its crew all on board relaxing and its position logged by AIS.

But let us go back in time to 1872 when ships were made of wood, powered by wind and sail, and the crew sometimes vanished.

Much has been written and continues to be written about the enigma of this vessel. Most of what you think you know about it and indeed what you read on the Internet, is not based on fact, but on the imagination of writers enhancing the story - and inaccuracies in reporting the events. 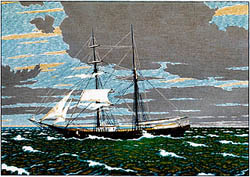 A wood engraving by Rudolph Ruzika

The Ship was originally built at Spencer's Island, Nova Scotia and named "The Amazon" In 1868 she was renamed "The Mary Celeste".

A scale model of the ship

An introduction to the story

One of the greatest legends of the sea is the mystery of the brigantine the Marie Celeste, which according to common knowledge was discovered at sea totally deserted.

The master and crew had suddenly vanished into thin air. Their clothing was found perfectly dry and a phial of oil was found balanced on a sewing machine in the Captain's Cabin. The legend tells of steaming mugs of tea, breakfasts half eaten, a clock turning backwards, and the ship's cat.

What happened to the people - Were they abducted by aliens - Did a monster of the deep swallow them - Did they visit the twilight zone - Did the Bermuda Triangle strike again ?

There is of course a simple explanation, the strange things listed above are all inventions AFTER the event and never happened.

The first thing to note is that the ship's name was the MARY CELESTE and this website deals with the true story, fact not fiction regarding the real and mysterious happenings connected with that ship.

When you read stories of mysteries the author often mentions that he 'came across a bundle of papers' - that is exactly what happened to me - However in the bundle of papers was a copy of the court inquiry into the Mary Celeste, which was held in the Admiralty court in Gibraltar.

According to legend the records are 'sealed' - they are not, they are in the public domain. In 1992 whilst moving offices, I came on a bundle of papers which were the patient research of some unknown person into the so called 'mystery'. Included in these was a full transcript of the Admiralty Court inquiry. Finally, here was an official, reliable and original source of information. The original documents are in the Government archive.

This collection of papers and the transcript gives one a totally different perspective on the affair. Suddenly the people involved have names, their sworn evidence has a different flavour to what we are accustomed to today; this was a time when the world was a very different world.

Today we perceive court hearings as being an adversarial battle between slick lawyers. We might watch real defendants answering questions in court live by satellite from the other end of the earth. In this Admiralty inquiry there was no need for DNA evidence regarding the 'blood' on the sword, 19th Century chemistry was quite adequate.

Despite today's technology bringing the court into our living room, the testimony of honest seafaring men in 1872 carries more sincerity, and is easier to accept at face value. So, working from a basis of the facts rather than the fiction of a legend, here is the story from a different angle; let us forget the myths, lets even forget the mystery, for in reality, there is very little.

Let us, however, remember that behind the inventions of the many people who have written about this unfortunate vessel, adding to the story as they went along, there was the real tragedy of an error of judgment which cost an otherwise exemplary Ships Captain his vessel, his life, the lives of his crew, and those of his wife and young child.

These were real people, not fictional characters, who perished at sea at a time when radio communications were unknown. Weather was something that could only be experienced or looked at historically, not viewed in real-time on a computer screen. There were no weather forecasts, storm warnings and life on the sea was all the more perilous because of that.

So prepare to discard what you think you know, as its probably wrong. 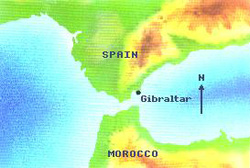 Gibraltar is at the entrance of the Mediterranean 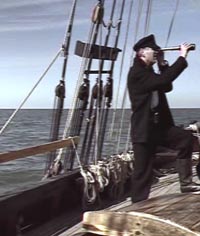 Looking at a vessel at sea

Events leading up to the mystery

It was 9am on the morning of Friday, December 13th 1872 when people on the waterfront saw a small two-masted sailing vessel entering the Bay of Gibraltar.

Her master, Benjamin Spooner Briggs known in Gibraltar to be a staunch abstainer from drink and devout bible reader. At the inquiry the ships main owner James Henry Winchester gave evidence that the Captain was a courageous officer who would not dessert his ship except to save his life. The second-in-command, the Mate, was Albert Richardson, who was also considered by Winchester to be fit to command himself.

But of the good Captain Briggs, his wife Sarah, two year old daughter Sophia Matilda, and the crew of seven, nothing was to be seen or found ever again. And so begins the greatest of mysteries, or at least it might seem.

However, were it not for Dr Arthur Conan Doyle, struggling to establish himself as a writer prior to creating Sherlock Holmes, perhaps the world would not have ever known or cared.

The story, like many a tale, it has grown with the telling, to incorporate speculation of further mysteries, including pirates, creatures from the deep, abduction by aliens, submarines, and time travel.

Conan Doyle's short story about the 'Marie Celeste' (he changed the name from Mary) turned a minor puzzle into one of the most famous legends of the sea. Nevertheless we should recognise it was fiction, for which his editor paid 30 Pounds, which would have been a respectable sum in 1884.

Turning back to the REAL story, which is supported by shipping companies and court proeedings transcripts whih can be found and researched, we find the following facts;

The insurers of the Mary Celeste

The 'Mary Celeste' sailed from New York on November 7th bound for Genoa with a cargo of 1701 barrels of American Alcohol, shipped by Meissner Ackermann & Co., value approximately $35,000 the purpose of which was to fortify wine. The value of the freight on the alcohol was $3,400 and the ship herself $14,000. The Vessel's cargo was insured in Europe, and the hull insurance was carried by American companies.

The Freight was insured by the Atlantic Mutual Insurance Company of New York, the last survivor of her American insurers, which went into liquidation in 2017.

She was followed on 15th November by the 'Dei Gratia' which followed a roughly parallel course across the Atlantic carrying a cargo 1735 barrels of petroleum.

On the Afternoon of December 5th 1872 half way between the Azores and the Portuguese coast the 'Dei Gratia' sighted a Brigantine which Captain Morehouse recognised as the 'Mary Celeste'. He knew Captain Briggs and had dined with him before he sailed. He was puzzled to see the ship yawing, coming into the wind and then falling off, she was out of control. He knew Captain Briggs to be a good seaman.

There were no distress signals, and after watching for two hours and hailing her and getting no reply they set off in a small boat and duly boarded her.

The vessel was found to be in good seaworthy condition and the general impression was that the crew had left in a great hurry. They had left behind their oil skin boots and pipes. Captain Morehouse's explanation was that they had left in panic thinking the vessel to be sinking. The chronometer and sextant were not found on board. The last entry on the ship's slate showed she had made the island of St Mary in the Azores on November 25th. 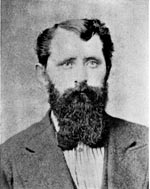 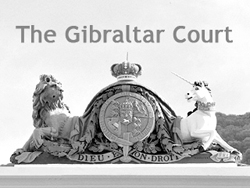 Oliver Deveau the Chief Mate of the 'Dei Gratia' was in charge of the boarding party. He found one pump out of order, and only used the other on his way to Gibraltar. He found the fore hatch off and also the lazarett hatch off with a great deal of water between decks.

A lazarette is usually a storage locker used for gear or equipment that a sailor or boatswain would use around the decks on a sailing vessel. It is typically found below the weather deck in the stern of the vessel and is accessed through a hatch from the main deck or through a doorway from below decks.

The clock and compass were spoilt and destroyed. The Court record states that Deveau found no beer or spirits in the ship, and the cargo had not shifted.

The Chronometer, the sextant navigation book and the ship's register and papers were also missing. There was not a log line ready for use.

Let us at this point forget about steaming mugs of tea, ship's cats, everything in supposed pristine condition. Certainly there were no half eaten breakfasts, and no phial of oil balanced on the sewing machine. The vessel was observed out of control for two hours before she was boarded, and had experienced storms and heavy seas in the days prior to her discovery.

The court record states: "The Galley was in a bad state, the stove was knocked out of its place, and the cooking utensils were strewn around. The whole ship was a thoroughly wet mess. The Captain's bed was not fit to sleep in and had to be dried."

Now we come to a crucial bit, Charles Lurd, crew member states; "We found no boats on board", he could not state how many there should have been. He felt sure there had been a boat at the main hatch from the fixing there.

There is much speculation in the fictional accounts about a sword with blood stains, pointing to violence, however in the court record the Mate Oliver Deveau states he did not see any blood anywhere. He saw the sword it was in its sheath and was rusty. He gave it little significance. The popular mystery has blood marks and a bloody sword, with the evidence of the inquiry sealed. What it really says is that the sword had been cleaned with lemon, and the result was iron citrate, not dried blood. No need for DNA testing, Dr Patron and the science of the day was sufficient.

The Captain's sword now in the Peabody Museum

The only dry clothes found were dry because they were in a watertight seaman's chest. Everything else was wet. There is a mystery of the clock face being upside down, but not because of any 'time warp'. The Mate had removed it to clean it and put it back wrongly.

In his conclusion the Judge praised the crew of the 'Dei Gratia' for their great courage in view of the risk to both vessels in dividing the crew, and their great skill shown in bringing both vessels safely to Gibraltar.

However, the attorney general in charge of the inquiry, Frederick Solly-Flood, suspected mischief and investigated accordingly. After more than three months, the court found no evidence of foul play. Eventually, the salvagers received a payment, of only one-sixth of the $46,000 for which the ship and its cargo had been insured, suggesting that the authorities were not entirely convinced of the Dei Gratia crew's innocence.

The ship then sailed for Genoa to deliver its cargo without any further incident.

The cargo was unloaded and the US Consol in Genoa reported;

"The cargo came out in excellent condition, so much so that the consignee, who wished to relinquish it to the underwriter, could find no excuse to do so."